I just found a goldfish in my bra.

I'm not sure how long it was there. But it tasted fine.

Which brought me to this meme someone sent me. The boob challenge? A real woman?

Honestly I haven't seen the bottom of my boobs since the training bra days back when my Mom took me to the doctor because she thought I had breast cancer.

"See those bumps, that's not normal is it?" She asked pointing to my chest. 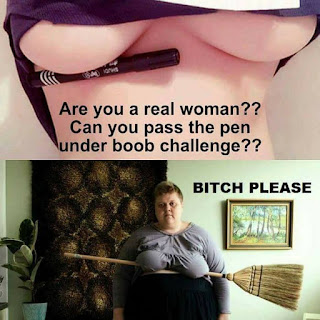 "The beginning of boobs," he replied. I think he said breasts, but my mind went to boobs, tatas, jugs.

What did my mother do? She immediately took me out for a TRAINING BRA!

What honestly does a training bra train? We went from the doctor's office directly to the department store to the lingerie department, the old lady behind the counter clucking over me as she led me to the training bras. Mom picked out a few white lace ones because "I am a good girl" and let the woman measure me for the perfect fit. We settled on two white lace ones and one American Flag print because we are patriots.

My mother had to see each one in the dressing room making sure they fit, pinching the sides asking if they were too tight. (More therapy about that one later) I think my sisters thanked me later for sparing them the humiliation, being the eldest daughter of the family and that meant basically I was the human guinea pig.

Now I can't live without my training bras, I mean sport bras. They hold everything in place and even serve as a nice storage place for food in case I get caught out in the cold!

Did you have a training bra growing up?
Posted by KellyM at 6:28 AM