There's sibling rivalry, then there's a whole new dose of it when it comes to being first.

First to the car in the morning for the front seat.

First into the bathroom to poop in the morning.

First to push the elevator button, this one, my friends was the worst.

We'd go to the doctor's office and the fight started over who gets to push the wheelchair button to automatically open the door.

Then I'd stare down the long grey carpeted hallway to the elevator at the end.
Just like the movies, the hallway would grow longer as I prepared for it.

Both boys would look at each other with a,

And when I say ON, I mean bigger and better than any Black Friday opening at a Walmart with only 3 TV's at a discount. 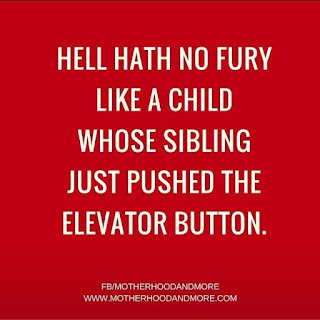 Both would start in a full run, the youngest tripping the oldest halfway down the hallway then resembling a running back jumping over him to get to the elevator first.

The oldest would jump up, pulling the youngest down by his shirt. Two people walking down the poor hallway would jump out of the way.

Both would crash into the elevator at the same time,

one with a millisecond advantage, pushing the elevator button first. The other screaming in frustration.

The other simply pushing the wrong button for the rush he missed in the showdown.

Then we move to who gets to push the button for our floor first.

So many people would say, "Oh, you go ahead, we'll take the stairs."

Now we move to who gets the front seat of the car on my carpool days. The boys have decided whoever calls "Shotgun" first gets the seat.

It started when they were sitting at breakfast, one looking to the other with a big smile saying, "Shot gun."

The the other got smart, opening the door to the bathroom pouring cold water on his brother saying, "Shot gun."

The youngest set his alarm 5 minutes earlier than his brother, getting out of bed walking to his room saying, "Shot gun."

Finally the oldest woke up in the middle of the night, called his brother's cell phone, leaving a message with a time stamp simply saying, "Shot gun."

I had to put a stop to it because we never made it out the door on time with all the arguing, even days the oldest gets it, odd days the youngest.

They are still arguing about it.

Oh the joys of childhood, arguing with your siblings,  wait, I still do that with my sisters,

It's over the last glass of wine in the bottle though.
Posted by KellyM at 7:33 AM