WTF - What Happens At The Dump Stays at the Dump

I love our small town Dump, in case you didn't read other posts about the friendly services of our Utilities personnel, click here for:

These awesome employees let my children look around for hidden treasures, take notes on what we are looking for, as well as make sure reusable goods get into the hands of people who need them. 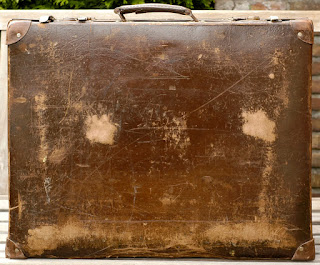 Today I went over with my recycling, a few trash bags and extra time to chew the fat with the employees.

Of course, I arrive as there is excitement at the dump.

Someone has found an old briefcase!

We all look at the corner of the briefcase peeking out from under a bunch of trash in one of the dumpsters.

"What do you think? Should we go for it?" Someone asks.

"Of course, what if there is something in it?" I say, "Look it has an old Eastern Airlines baggage tag on the handle, that really dates it. What if someone took it off an airplane, threw it in their basement for years, then finally took it here without looking in it!"

"Could have money in it," someone says.

"From Duggie Howser," Someone added.

"That's the doctor kid on TV, are you talking about D.B. Cooper?" I ask.

"Maybe a treasure map,"someone else says.

"Or stocks and bonds," another adds.

"We're splitting it, right? Not finders keepers?" I ask thinking of all the books I'd buy with my part of the "treasure."

"Of course," he says, I'm waiting for him to add, "We's all family on the mountain."

We fish the briefcase out, everyone excited because it is LOCKED! Surely that means there is SOMETHING in it!  I haven't had this much excitement in the dump since finding my outdoor furniture there!

"Sometimes things are locked for a reason," Someone says as excitement builds.

We all stand around while one person gets a screw driver, forcing open one lock.

"Wow, remind me not to buy this kind of briefcase, I'd be robbed in no time," I say as the other lock is quickly broken.

"Here goes nothing," he says opening the briefcase.

"Oh well, at least it gives me a story," I say as he throws the briefcase back in the dumpster.

Don't worry, there's still treasure waiting in our tiny dump, you just have to look for it!

Like the wine bottle/glasses holder I found made from pallets!