This is my second year of Sweep Car for the Beech Mountain Metric a 43 mile or Metric Century Bicycle Ride starting in Banner Elk and ending with a climb from Valle Crucis to the top of Beech Mountain!  Yes, you have that right, not only do cyclists sign waivers for the race but they are get their commitment papers at the end for the insane asylum!

Last year I was "Volunteered" for the sweep car by some good "friends." Because I have a hard time saying "no," I talked another friend into it thinking, "If I'm going to be miserable then we're in this together!"

Sweep is the truck with the trailer following the very last cyclist in the race, we start the race with everyone else, then slowly make our way through the course with the last cyclist. We take bets on who we'll be following this year,

"I think pink socks will be with us for a while."
"Yeah but tree trunk legs has already had 2 flats."
"I thought we'd be following Rainbow Shirt dude, did you see him take off on that downhill?"

We read through the worst jokes on the internet.

We read through all the celebrity news, contemplating if Blake and Gwen would stay together.

We ate our breakfast bars. 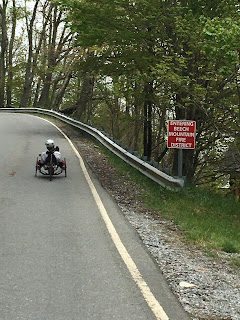 That was the first 20 minutes of sweep.

Why do I choose to volunteer Sweep?

Traveling the course at 15 miles per hour you actually

see the scenery.  This course covers some areas I was unfamiliar with and the beauty of Spring was awesome.

Luckily we choose our Sweep mates, because spending all day in a car with two other people mean you have to REALLY LIKE them. REALLY REALLY like them.

We have great conversations along the way picking up the signs as the last cyclist passes them.

We help those in trouble, fixing flats, checking chains, providing moral support when they just need a hand on the shoulder.

We hang with all the great volunteers closing up the aid stations as the last cyclist passes. 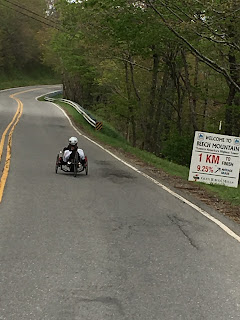 We hug and cry with those cyclists that know they cannot go any further, their ride ending for the day. Some are due to exhaustion, others due to wrecks, some due to bikes not cooperating. These people ride with us to drop off spots, we get to know them, including why they are crazy enough to attempt this race.

It is a long day but at the very end it becomes worth it. This year it was a guy, Herman on a recumbent bike, a three wheeler with a chair. We followed Herman in the beginning of the race for a while, losing him as we fixed flats, etc. At the very last aid station in Valle Crucis, I spotted the recumbent bike turning to my mates, "Looks like we're with Herman for the end of this ride."

They both looked over, "Do you think he can make it?"

"I think so, he looks tired, but not complaining, just getting the show back on the road," I answer.

We start up the two biggest hills of this course and after over 60 miles already, Herman is preparing his climb up the mountain. We follow him up and out of Valle Crucis, slowly but surely, knowing his weight is different that a regular bicycle, he's pulling it up the mountain. Coming into Banner Elk we watch him stop, and start talking in the car.

"How can he quit now, he's almost there."

"We'll support him if he quits."

I run over to him, not making him get up if he doesn't want to, knowing after pedaling that long, getting up could signal disaster as things start cramping up.

"You OK?" I ask not giving him the option of quitting.

"My flag broke off my bike," he says, not getting up from the bike.

"Here I'll take it, the only way you get it back is at the top of Beech Mountain, deal?" I say.

He smiles wide, I think I see determination in his eyes, "Deal. Don't sell it, it may take me a while to get up there." He says laughing.

"We're right behind you," I say, running back to the car.

Everyone in the car start whooping as I say it was just a flag malfunction and Herman is on his way. We all look at the clock at the bottom of Beech Mountain taking bets, I'm at 35 minutes to the top others are saying 40 to 45 minutes.

The last 3K up the mountain are why we race, why we volunteer. We watch someone do something they think is impossible. 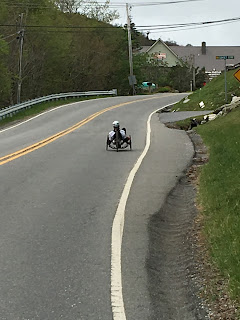 "God, he can't stop now, he could walk the last part of it."

"Is he really stopping?"

Herman is kind enough to pull to the side letting all the cars stuck behind him move past on up the mountain. He makes that final push, I'm hanging out the top of the car waving his flag yelling, "I've still got your flag!" Others are taking pictures, and cheering him on as he crests the top of Beech Mountain rolling into the finish line. I can't describe the feeling as he finished, almost as if we finished with him, hell we rode the entire way with him, but in a car. 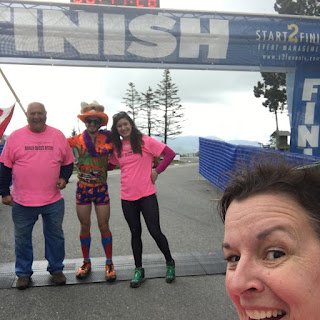 I walk over, giving Herman his flag, making sure his finish time is recorded. Sure they are cleaning up from all the other cyclists passing through a good two to three hours earlier, but Herman is treated like a king as the last rider, eating and drinking and congratulating himself.

Sweep this year was 6 hours and 44 minutes of bonding time between good friends.

The fastest ascent up Beech Mountain was 18 minutes, Herman's time was 45 minutes.

The fastest rider on the Metric Century (65 miles) was 3 hours 24 minutes, Herman's time was 6 hours 44 minutes.

I think it makes us all winners in my book.

See you next year!