I think the motto for my family is:

"Well, that didn't go as planned." 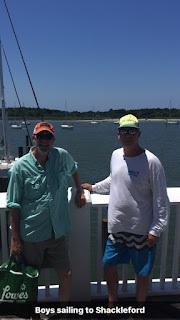 Case in point. My husband brought down a small sailboat (Escape) with the intention of sailing over to Shackleford Banks. Shackleford banks is an island about a 30 minute power boat ride from Beaufort.

He started with me, "You ready to sail with me to Shack?"

I immediately ignore him and act like there's some monster living in my coffee.

He turned as a child walked into the kitchen, the child heard the word "sailing" immediately disappeared back into his bedroom.

So the hubby is moving onto his brothers and sisters, immediately finding the first available guinea pig, his brother.

Here's the picture my honey had in mind sailing his sailboat: 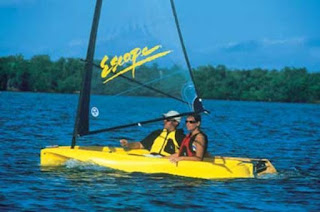 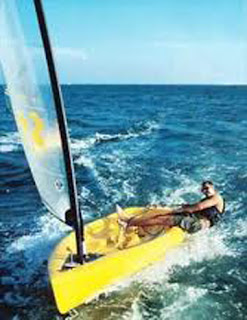 They pack a cooler - waters, beers, some snack crackers because you know it is a long way in a sailboat to Shackleford. The hubby already saying, "Just the power of the wind!

They apply sunscreen, grab hats, sunglasses, checking off a list before embarking on their tour.

My son and I say a small prayer as we watch them walk the boat down to the free dock.

20 minutes go by, and I go out looking for them but don't see them out in the waterway. "I wonder where they are?" Until I see a hint of the plastic sail by a boat before disappearing again.

Another 30 minutes go by and there they are!

"Look! They are sailing!"


My son says, "Why is there so much water in the boat?"
"That's a good question." I reply.

So things didn't go as planned. My brother in law's version:

That damn plastic sail sounded like a jackhammer every time the wind hit it.  We couldn't get out of the boat dock. Every time I told Jeff we were getting ready to run into something he simply replied, "Don't worry about it!"

My hubby added, "I think we had a little too much weight. The pirate ship guy got a little concerned when we almost hit the boat with the kids on it. Blackbeard was yelling at us!

But we got out there! We were sailing!"

then it all went down hill from there.

Brother in law, "I told Jeff his flip flops were floating out of the boat, he replied, "Don't worry about it!"

Then I told him we were sinking, he said, "Sinking about what?"

Jeff, "I told Erik we had too much weight in the back on the boat, so he moved up front and the entire front went under water, then I thought we were probably in trouble."

I pull us into the dock in front of Finz and the dock master comes running out saying, "What are you doing?!?"

I look up from the plastic sailboat and say, "Give me 150 gallons of fuel and a six pack of beer."

He looks as me like I was crazy, so I say, "Hey, it was an emergency."

"Get that boat out of here, there's a boat coming into this slip!" 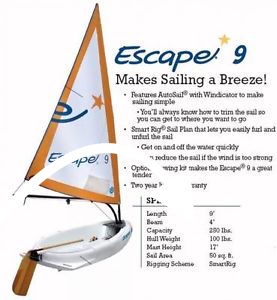 So their sail to Shackleford turned into 20 minutes bouncing off two other boats until finally saving themselves at Finz!

Later that night at a local bar, one of the bartenders looks at my husband saying, "Wait? Are you the dude that was sailing that little boat?"

They've become legend. Another guy in a bar said, "Oh yeah I saw that from my sailboat, I do believe you two ended up on my Snapchat story."

Things never seem to go as planned but then we wouldn't have the stories to laugh about in the bar!

Sometimes Plan B is a funnier alternative!