You can always tell it is spring in the house when the hubby stands up shouting to everyone:

"Kids! It's time to clean out the garage."

Now I have two teenagers, and they both look at me saying, "Why?"

I plaster a smile on my face saying, "This will be fun, we'll do it as a family and all be proud after all the work we did." I can see both boys rolling their eyes as Fun and Family project never go well together in this household.

"Sure honey, this is gonna be fun, right?" 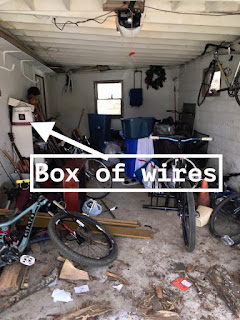 They both start complaining before the project even starts, trying their best to change Dad's mind.

They even resort to:

"Dad, have you seen the news? Let's watch the news together."

Nope, he is determined. After watching Tropic Thunder together we all go to the garage. 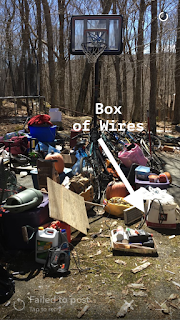 "How many bikes do we have in here?"  He asks, I can't answer it, it's close to how many books I have.

"Kids, let's get started!"  He says as he and I start pulling everything out of the garage until we realize the boys are touching the stuff as we pull it out constituting that as work. "Kids! Get in there and pull out all those drawers!"  They pull a drawer out with three mouse skeletons in it.

"Eww Dad, I'm not gonna touch that!" One says as the other looks thoughtful poking at the mouse skeleton with a pencil.

We're creating a toss pile, a keep pile, a "Mandy" pile when I notice I'm pulling all the shit out while the kids stand by the pile telling me where to put things:

"That's a Mandy pile, we can sell that. Oh, that's a toss pile, who needs a box of old electrical wires!"

My husband follows us pulling the box out of the son's hands, "We need those wires!

Of course I know we don't need those wires, that box has sat in the garage for 10 years. He proudly walks his box of wires putting it in the keep pile.

"Stop standing there and pull things out!" He yells at them, everyone going in I'm grabbing several things while one child walks out with an empty gas can. "Don't kill yourself, the future needs you," say as he walks out with a kite. 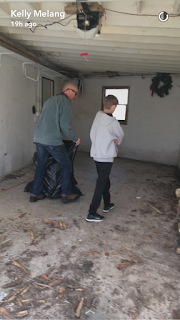 We're almost to our first load to the dump when the hubby walks over to the truck, "Who put my box of wires in the truck? We need those!" I listen to both teenagers argue with him about the wires as he proudly walks his box over to the keep pile.

One load of stuff goes to the dump and if you ever read my book on Beech Mountain, it is a known fact people in this community scrutinize the dump for "good shit" as we are readying our second load I get a text!

"Hey! Some idiot left an old snowboard and skis at the dump right now!  Go get them! Wow and who would throw away a perfectly good box of wires!"

My son says, "The reason we have too much stuff is all the stuff you bring back from the dump!" 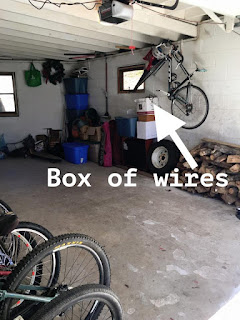 My husband sees his box of wires sitting next to the "Used Paint" sign saying, "Who put my box of wires there! There's good stuff in there!"

"From the dinosaur ages," my son says as we watch my husband put the box of wires out and put them in the backseat of the truck signaling they are special and no one to touch them.

Moving into load two we come down to the argument stage, the kids saying:

Moving load two out, my hubby spies the 2010 blue ethernet cord sticking out from under a load of used paper towels, "Kids, this isn't funny!  We need this box of wires!"

After load two to the dump, I get another text, "Don't throw away that white cabinet, I can use it! If you take it to the dump now it will disappear before I can get to it! Where did that box of wires go?" 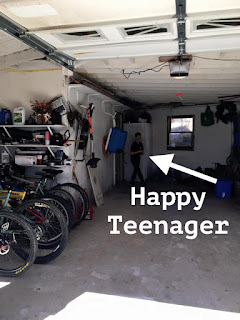 Finally finishing the clean out, the hubby and I are sweating, the boys still standing next to us until one looks to the other, "Whew! I'm exhausted, I think we deserve relaxation the rest of the day, right?" The other agrees and they go in to watch Malcolm IN The Middle, hubby and I look at each other, "But who's going to put all this stuff back in?"

"Kids! Get back here! We have to put everything back in!" He says walking back in with his box of wires.

"Then why did we take it all out in the first place?" One of them questions.

An hour later, we can finally walk through the garage, I can get to my freezer full of food without killing myself and that damn box of wires stares at me proudly from its perch in the corner.

Ah finally, I can relax and write this blog about spring, I think as I watch both boys fall onto the couch.

"Kids! Who's ready to clean out the ski closet?" I hear the hubby scream.