I'm cueing in a trip taking the boys to Liberty Snowflex Center in Lynchburg, VA. I change the voice of Siri to a very stunning Australian man named Rolf, making the drive a little bit better.

The kids scramble on our home wifi trying to download enough movies to cover 4 hours and 22minutes.

Our trip starts out pleasant enough, typical about 10 minutes 32 seconds into it someone is hungry. 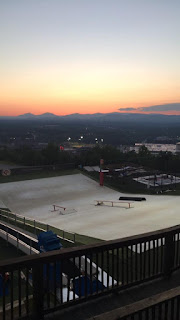 "Are you kidding me? We just left?"

"Honey we are out in the middle of nowhere, there isn't a Chick Fil A."

I hear him on his phone in the backseat, "Find the nearest Chick Fil A."

After about an hour, or so into the trip Rolf reminds me:

What? We've already been driving an hour and had only one bathroom break. I'm calculating the arrival time thinking, "Either we were in the bathroom way too long or I must have made a wrong turn."

This is where Rolf pisses me off. If I make a wrong turn, then he'll just instantly recalculate me to my destination even if it is an hour out of the way. He needs to yell, "Hey dumbass you missed that right turn I TOLD YOU ABOUT and are going the WRONG WAY!"

Once I missed a turn driving in MD and Rolf navigated me to the Chesapeake River saying, "Take the ferry."  What? Take F*cking Ferry where? It was a beautiful ride down the Chesapeake then an equally beautiful drive through farm land but cost me 2 hours.

Back to Rolf and Snowflex, I'm thinking, "They'll still have plenty of time on the fake snow if we get there at 7 rather than 5, right?"

Another 30 minutes later Rolf asks, "There is a faster route saving 1 hour and 4 minutes, reroute?"

He takes me off the highway and we parallel the highway for 6 miles then get back on the highway. What the hell was that? I'm beginning to think Rolf has lost his mind.

Further down the highway, Rolf tells me, "Take exit 150A, then mispronounces some town names and Route numbers. I'm desperately trying to keep up with exit numbers because if I miss it, I'll add another 3 hours to the trip! Of course the signs say, "Lynchburg, the next 7 exits."

Holding my breath I have everyone looking for Exit 150A, all the kids screaming, "THERE IT IS" as I two wheel it, cutting off three cars but exit safely. 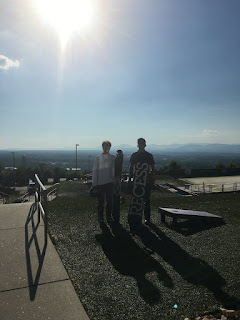 I'm looking for this, trying to look at the map and of course, miss it. I need Rolf to yell,

"Hey, my phone says there's a Chick Fil A 20 minutes from here."

It took me 25 minutes to get back on track because I was busy arguing with Rolf. He took me several back roads from Chick Fil A to State Road 8797453 including one under construction.  "Dammit Rolf, didn't you see the construction, we've been waiting here for 20 minutes!"

I'm going to go find my paper bag and maybe Rolf needs me to stop and ask for directions.
Posted by KellyM at 6:36 AM