WTF - Darling I Love You But Give Me Park Avenue

Moving into the dog days of summer, we're all about hanging outside in the mountains! So we got on all the popular bandwagons.

The miracle lounge chair that fills with air, ya'll saw the infomercial, haven't you?

Looks easy, right? Either that dude had a tornado behind him or a really big fan, I must be missing something.  I start waving the chair like a survivor on a deserted island until my shoulders hurt. I watched my kids run up and down in the grass my chair flapping behind them, before finally filling it with air. Then of course I didn't roll it properly, feeling my butt hit the ground as I climbed in, I have to admit it made me feel fat. Here we go again.

Then we moved to the Enos in the trees. These come with straps that require some type of rocket science knowledge or I guess I am Eno challenged. I stood in the trees for another 15 minutes trying to figure out the straps until my son (he's a math major) came out with a sigh, "Mom, you do it THIS way." Ten seconds and all three hammocks are up. I'm taking pictures of the strap setup so I don't look like a dork next time.

The kids decide on spending the night outside. the last time I slept outside was in the lowlands and I woke up the next morning the left side of my face covered in mosquito bites, but hey we're in the mountains, no mosquitos right? What could go wrong, they're in the back yard, it's cool night.

I'm planning on going out there later, just sitting inside reading a book as they settle for bed. 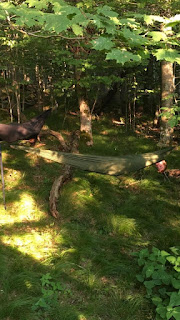 Around midnight, my oldest comes running in, "Mom! A bear just walked through our hammocks!"

I sit there thinking, the other child is asleep, so he didn't hear it, should I just leave him out there?

Then I wonder, where did the box of Goldfish go, did he take it in the hammock with him?

Is my boy bear bait out there with that damn box of Goldfish?

Even if he didn't take the Goldfish, he is a messy boy, what if his shirt smells like dinner?

The oldest and I go outside making a bunch of noise, me keeping watch while he runs out waking up his brother. I see a blonde head stick out of the hammock, deer in the headlight look in the eyes. No bear around I figure he was already on his way to the dumpsters at the restaurant further up the mountain.

"Go on and go to sleep boys, he's gone." I say but both boys walk into the house and their beds.

My order for the hammock stand for my front porch night sleeping comes in today.

Let's hope it doesn't require a Rocket Scientist to put it together.

How are your summer adventures coming along?
Posted by KellyM at 6:13 AM