So when the town explodes we still don't talk to all the neighbors, we just give them nicknames.

Hollywood House - that house with every light on at night including strings of Christmas lights. (I bet they leave the refrigerator door open and cool off the neighborhood also)

Kennel - that house with the 4 dogs barking all night oh and of course at 6am during summer when we don't have to get up early. 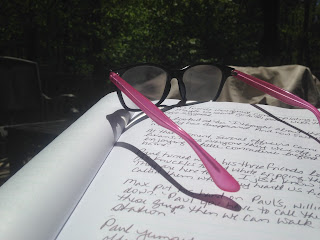 Dick and Jane - the couple that dresses alike for their walk around the neighborhood with a dog that looks like Spot.

The Screamers - No not that type of screaming, the parents spend most of the day screaming at their kids and the dog.

Lemon heads - these neighbors never wave when they drive by, and everyone on the mountain knows you wave! If you want confirmation, read my book Views From 5506

Is it Abandoned or For Sale House - there was much excitement on the street when a car appeared in the driveway, the first one in 10 years. And why is there close to 100 bones scattered all over the backyard?

So I'm having a conversation with the hubby:

I ran into James today.

No, James from the Kennel house.

No that's Bald George down the street, this is Skinny James with the Tattoo.

Oh, that dude, where?

He was out walking his dogs and they went after Spot.

Yeah, Dick and Jane's dog. I thought there was gonna be a fight. Right down the street by the Holsten House.

The Is It Abandoned House, 2 doors down from the Hollywood House.

Did someone actually buy that POS?"

Yup, and they're doing work, I was peeking in the windows when the Lemonheads drove by, I think they called the police or could have been Glenda, not sure.

What did the police do?

He told me no trespassing.

Guess I'll have to survey the work during the 5 months no one is here.

I wonder if I have a Nickname?
Wonder Woman
Screamer
Accident Prone
Kid Toy House

Let's hope I'm not the HollyWood House Owner - Gotta tell the boys to turn some lights off.
Posted by KellyM at 6:42 AM