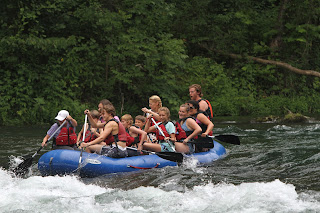 Every year my sister comes to visit and we do one big trip with the kids, this year it was White Water Rafting. I chose Edge of the World Outfitters for this year's ride.

As usual one person has to take charge and everyone looks at me. Am I the only one that reads websites?

You need shoes that will stay on your feet and can get wet. No flip flops (moan from boys)
Nothing of value goes on the trip, this includes cell phones (Big moan from the boys)
Sunscreen
Towels for the end and possible change of clothes.

Everyone was nervous and they fitted us for life jackets telling us they stay on the entire trip. I joked about not needing a lifejacket because I already have two floatation devices. (they didn't get it)

Some of the people on our bus took the "keep it on during the trip" literally, sitting in the bus with the lifejacket on!  I guess they did say "entire trip" right, but it was hot with the jacket on, it made a great headrest for bus ride.

I think what scared them the most was the hour bus ride to Elizabethan, TN with NO CELL PHONES! "What will we do?" My boys wailed.

"Um talk to each other?"

What's nice about EOW Rafting is the bus ride is a show in itself. If I could give the Corniest joke award to anyone, it'd be these guides. Nothing is sacred with them, I think I heard more groans on the bus than moans. Plus a lot of laughter. The nice part of this show is the bus ride went pretty fast, we learned the TN state flower (satellite dish) and animal (hootenanny)

EOW puts the rafts in by the damn on the Watauga River, my choice for taking a boat load (seriously a boat load) of kids. River rapids are in classes, measured by International Scale of River Difficulty.

The Watauga stretch for our ride had the highest rapid class at the Anaconda Rapid, a class of 3. 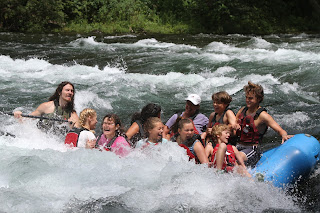 We were introduced to our guide Coleman, through everyone roasting him as they set our rafts in the water, setting us up. I didn't realize he lived with his Momma, drives her minivan, and his nickname is "wienie."

We positioned everyone in the raft, putting me and Wolfgang in the front of the raft as the two that will actually paddle when Coleman tells us to paddle.  The first words out of everyone's mouth is, "This water is FREEZING!" Yes, it will be cold and will stay cold as the water of the Watauga comes out of the dam, from the bottom of Watauga Lake keeping the temperature a balmy 52-53 degrees. Refreshing on a hot summer day!

We paddled our way down to the Anaconda, our guide telling us when to paddle, when to pause. I knew my son behind me was paddling because he spent the first part of our trip hitting my paddle!  We paddled down the Anaconda rapid, the kids screaming and having fun moving over to lunch after the rapid. This is where I think EOW stands out, 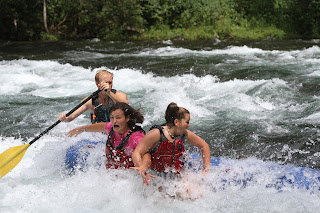 No, not the lunch, though it is delicious. Homemade by the shop's owners every morning. Chicken tenders, biscuits, lemonade and water, finishing with energy bars.
No, not the lunch show which was pretty amazing, the guides joking with all of us and each other. (some of them can actually dance) 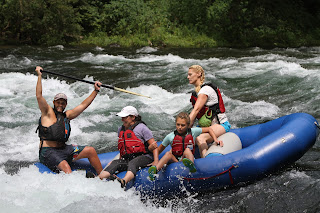 It's that we can stay by the class 3 rapid and travel down it as many times as we want, as long as we carry the raft back to the top of rapid. Our kids went down several times, a photographer taking pictures of them in the raft as they screamed by. Of course, usual to our group, two fell out of the raft on the rapid, all of us watching and yelling, "Nose and feet up!" It made for better stories as they laughed about pulling each other out, how cold the water was, which guides came over to save them. I enjoyed watching the guides dig in with their paddles as they brought the rafts over to the shore at the end of the rapid for the kids to carry up. (Hey, I'm human OK)

Since EOW leases the land to the side of the rapid, we ate lunch watching all rafts go by and keep going, while we rode the rapid over and over until everyone, including the guides were pretty worn out. Climbing back in the raft we made our way down the river over lower class rapids, two swimming holes along the way, kids flipping off the raft, pushing everyone out of the raft, the biggest complaint how cold the water was. Each time we had a water fight, my sister was in the middle of it, and she loved the feel of the cold water, not.

All in all, the trip was a success, the kids talking about falling out on the way back, another show from the guides on the bus ride back, AND a quick stop for drinks and bathroom before the bus ride! I would highly recommend EOW for rafting, especially with kids as they do a great job keeping everyone safe AND entertained!

Oh and guess what! Everyone survived, I'm not talking about the rafting trip but a day WITHOUT any cell phone interaction!

Get that last trip of summer in with a trip to Edge of the World for a day of rafting, you won't regret it.

Pictures sold at the end of the trip! Priceless memories. 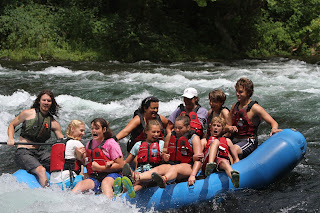