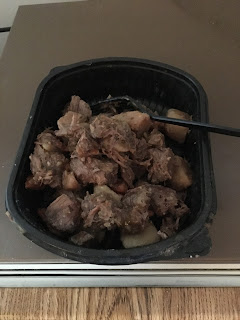 Last day of skiing at Killington and we all made it until 2pm. What a great way to end the season!

So how did I feed three teenagers on a budget? Grocery store!  I found a market that included a deli and bought them them two big vats of beef stew along with another vat of mashed potatoes! Done! I left all the kids with their food in the room to go have a glass of wine in the lodge in front of the fire and work!  Ahh, now I get my relaxation right?

After an hour of writing and relaxing, I figured I should move the boys out of the room into the hot tub or just get them to do something.

My first thought when I walk in the room was, "What's that smell?" As I step into something cold and wet on the carpet.

"Oh, that's the stew," my child says, "Max was holding it and I swung around knocking it out of his hand." They are all casually watching TV. 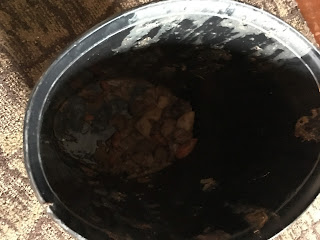 "Oh my God, it look like someone puked in here!" I say picking up the towel looking at the stew on it, "Or had diarrhea!"

"What?" They say, "We ate most of it, just a little bit spilled" 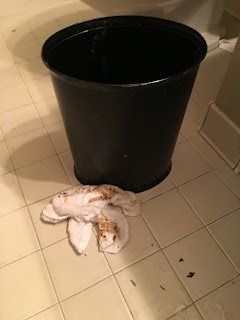 "We sprayed air freshener because the room smelled like stew," they say. I go and do what they should have done, open the window.

So we go about cleaning up the stew because we have to check out in the morning!  I make a towel pile in the bathroom, covering the stew towels (which looked like someone pooped on them) with cleaner looking towels hoping the maid won't see them. In the bathroom, I'm shocked, "Who got stew on the toilet seat?" I ask while cleaning that up.

I find the rest of the stew in a trash can without a liner, looking like someone puked in it. I dump the stew into the toilet, try cleaning out the trashcan but it's already dried to the trash can,

Not only did I step on a cold wet carrot in the middle of the night using the bathroom, but I decided the only thing I could do was leave this note for the maid. 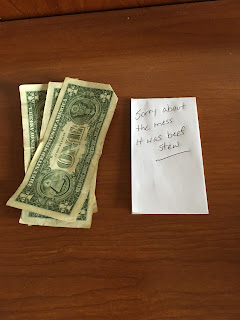 Back to the car and the first of our major road trips working our way back,