I have a little dog. A little watch dog.

Or so I thought.

Yesterday after a successful trip to Linville Falls Winery for the Harris Brothers, Shawnee (my watchdog) and I came home for a little TV watching. My boys were out at a movie. 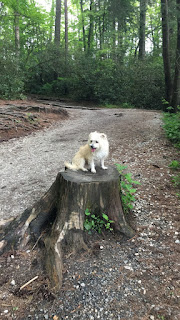 We watch TV, I fell asleep waiting on the kids to come home.

They do, just your normal Sunday night, right?

Until they go downstairs and I hear, "Jesus!" And a door slam.

I go running downstairs and both boys doors to their rooms are shut and there's a....

Dog sitting in my downstairs living room, very comfortable on my couch.

Both boys peek out of their bedroom doors, "Who's dog is that?"

Turns out she was a shy but friendly dog, who rolled in bear shit. I knew who she belonged to because another friend came by the house a few hours earlier telling me to be on the lookout for said dog. So, my child's boss's dog ends up wandering into my home.

You can't make this shit up.

So I then turn to my WATCHDOG asking, "Did you invite her in? Did you two have a party while I was napping on the couch? Did you teach her to roll in bear shit like you do all the time?"

She warms up to me and makes me hold her until Daddy comes to get her, so now we both smell like bear shit.

She got home safe and sound, while my watchdog followed me upstairs saying, "So do I get a treat now?"

Folks, keep your doors closed if your watch dog doesn't know how to watch dog.
Posted by KellyM at 6:17 AM