Today, on America's birthday, I put my new flag up proud to be an American. I am proud of this country. An experiment started by our founding fathers, flawed at times but always rising up to do the right thing. 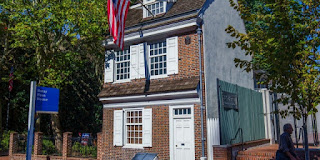 To me the American flag, all of them, are proud symbols of our heritage. Each has its unique and true story as a testament to different parts of our history. There are several ways to understand the flags and their makers. In Philadelphia, the Betsy Ross house still stands where she made our original flag. I was taught in school to look at Betsy Ross as an American Icon, now I see her as one of the original


feminists. Defying the British and creating the symbol for our country. In May of 1776, she met with George Washington, Robert Morris and George Ross and accepted the commission to create the flag. She knew Washington from sewing ruffles and other items for his wardrobe. The flag was finished in June of 1776 ready for July 4th 1776. 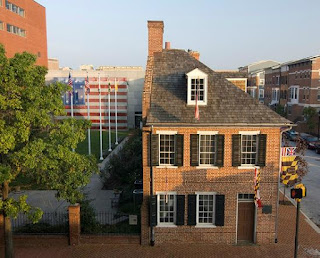 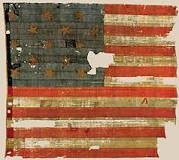 In the Smithsonian collection at the National Museum of American History, the Star Spangled Banner is displayed. The size of this flag is immense, 30feet by 42feet! When Mary was commission by George Armistead, he wanted a flag so big that the British would have no difficulty seeing it from far. The boys and I went from the small house where Mary made it to looking at the massive flag and learning about all the hard work at preserving it. On the flag you can see where pieces were cut out for different people to keep as mementos including one of the fifteen stars. Some of the original needles are still in the fabric and the initials of Armistead are sewn proudly on the back. Watching workers in white suits meticulously cleaning the flag and preserving is also pretty cool. The history of what happened to the flag after flying over Ft. McHenry is depicted in black and white pictures with the story of Armistead keeping the flag as a triumphant memento of the war later gifting it to its permanent home at the Smithsonian in the American History Museum.  Displayed in a glass case for 50 years except for two times during WW2 the flag was further restored and is now displayed in a climate controlled permanent installation. It truly is a sight to see!

So I'm waving my flag proudly because America, like me, has things in our past that maybe we're not proud of but we always rise to do the right thing. God bless America and Happy Birthday!
Posted by KellyM at 8:54 AM